By continuing to browse the site or closing this message you are agreeing to our use of cookies. Accept

Technical Analysis of the Financial Markets for Beginners

Share this:
Technical analysis is a price movement which is forecasted for the nearest period of time. Technical analysis is based on the analysis of price changes in the past. To obtain a stable profit, it is necessary to determine the current trend and close the trading position for it.

When forming prices, all the factors that somehow may influence their formation are taken into account. All these aspects are necessarily taken into account by the market, and initially included in the exchange value.
1
Price moves according to some trends
Price changes are not random, but they move according to certain patterns.
2
All price movements tend to repeat
Price fluctuations may reflect the current market sentiment.

Chart Analysis
Analytical Method
Wave Analysis
Resistance/Support Levels
Channel as an element of technical analysis
Fibonacci levels
Types of Charts
Linear
This chart only shows the closing price for each subsequent period.
Japanese candlesticks.
The rectangle between the opening price and the closing price is the body of a candlestick. The lines coming from this body to the highs and lows of the price is a shadow.
Bar chart (bars)
This chart shows the maximum and minimum price, the opening price and the closing price.
Patterns of Technical Analysis
Confirming the trend reversal
Head-and-Shoulders Pattern
Triple and Double Top/Bottom Pattern
Confirming the continuation of trend
Flag Pattern
Pennant Pattern
Confirming the possibility of both a reversal and a continuation of trend
Converging Triangles Pattern
Divergent Triangles Pattern

Methods applying filtration or mathematical approximation of time series are called analytical. The main tool of this method is an indicator which is a set of features from one or more main time series.

The most popular platform for trading with indicators on Forex is MetaTrader4. It allows you to adjust the performance of indicators by certain parameters:

You can configure the necessary parameters by right clicking on the chart and selecting “List of Indicators” in resulting menu. Next, select the desired indicator and click the “Properties” button.

Ralph Elliott suggested to use the wave analysis in 1938. According to his theory, the price movement can be represented by several waves:

Waves can be divided into two types:

According to the Elliott’s theory, any of these waves on the trading chart is a part of another longer one which can be subdivided into even shorter ones.

Usually, it is not always possible to indicate accurately the impulse waves 1, 3, 5, which consist of five other subwaves.

When analyzing the Elliott’s chart, you can pretty exactly determine the current state of the market, which will help you to make the most correct decision. The chart below shows that in the future the 3d wave will cause a small decline (4th wave), and then again will increase the growth of the current rate to the maximum value. After this, the decline will come next, before which it is necessary to lock in profits, and then close the long positions.

Resistance level is the price line from which the price increase starts. When the price falls to a given level, it starts out from it and moves in the opposite direction. Support level breakout may still happen, but not at the first attempt. Most often, after breakout the support level becomes the resistance level.

To display the resistance and support levels on the chart, it is necessary to allocate the largest concentration of the highs and lows of the price. However, you should take into account the sentiment of the whole market, and not just its highs and lows.

Support and resistance levels are quite powerful tools in trading despite its simplicity.

In technical analysis, there is such element as a “channel” that is some kind of a corridor between support and resistance lines. The duration of the price stay in this corridor influences whether the price leaves it or not. There are three types of channels:

The signal for buying is a breakout of the resistance level in the bullish channel. The reverse situation is observed in the bearish channel. There are two basic rules for traders within the channel:

The construction of the price channel for identifying the guiding trend is possible using inclined support and resistance lines. For this, you will need only three points, a maximum and two minimums (in case of an uptrend), or a minimum and two maximums (in case of a downtrend). Due to the fact that the maximum (minimum) indicators may depend on the news data or the long market inertia, the resistance and support lines on the chart should be drawn through the price clusters.

23.8%, 38.2%, 50% and 61.8% indicators are generally considered the Fibonacci retracement levels allowing for analysis and forecast of financial instruments dynamics

However, the key trend cannot always go up, and at some point, it pulls back.

The levels provide an opportunity to understand correctly the main objectives of correction. 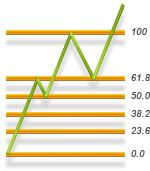 The price chart shows an uptrend that met with some resistance at 0.7800. After that, the correction was fixed to approximately 61.8%, which is a consistently high support level. At this level, the breakout was able to continue correction up to 50%. However, in the current situation, the currency quotations rebounded from 61.8% and retesting of the entire level took place.

Summarizing the above, it should be noted that the levels allow the trader to find timely correction moments and fairly strong support and resistance levels.